" Why Griffins? Because recognising and understanding gender issues is critical when managing women who offend. Griffins supports research that makes a real difference in individual lives."
Jean O'Neill 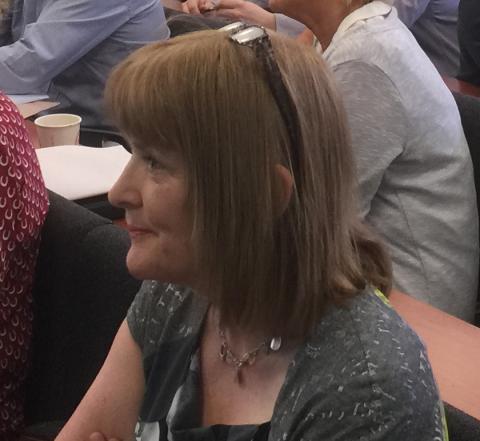 After graduating in Social Work from Trinity College Dublin in 1984,  Jean moved to Northern Ireland and after a short period working with Barnardos as a Residential Social worker, she secured  employment with the Probation Board for Northern Ireland (PBNI).   In 1988 Jean moved to Liverpool and worked as a Probation Officer with the Merseyside Probation Service, based in Court teams, local field teams and  in Walton Prison.

Jean’s interest over the past  26 years include working in partnership with the community, statutory and voluntary agencies in the management of Car Crime in West Belfast.  Car Crime was particularly high in Belfast during the period of conflict. PBNI were keen to develop community based solutions in reducing the levels of car crime in the area.  Jean  managed two projects, the Turas Project in 1993 and the IMPACT Car Crime project in 2004. Both projects were recognised as successful in reducing car crime in the area and Jean was awarded the Butler Trust Award for her work in this area.

As operational manager within PBNI , she let the creation of the PBNI assessment unit in the preparation of pre-sentence reports for Courts, and the development of initial  Standards in relation to Probation Supervision.

Since 2004, much of her work has been dedicated to the development of services for women offenders. She assisted the drafting of the DOJNI Strategy for the Management of Women Offenders and those vulnerable to Offending  (currently under review).  She led the establishment of the Inspire Women’s Project in 2008. The INSPIRE Project  is a PBNI lead project working  in partnership with other statutory, voluntary and community sectors to provide quality interventions for women offenders in the community

This project was evaluated by London South Bank University 2010 and was positively viewed by Dame Owers in the Review of the Northern Ireland Prison Service 2011.  It was included in the Soroptimist ‘Reducing Women’s Imprisonment’ 2013 pack and featured in the Volunteer Now NI publication on working with women in the Criminal Justice System, 2013.

In 2016, Jean completed a fellowship programme with the Griffins Society,  her research involved a research conducted on women’s experiences of imprisonment and their transitions from custody in Northern Ireland.

She was awarded  the Lifetime Achievement Award sponsored by the Northern Ireland Association of Social Workers in 2016 in relation to her work with women who offend.